Italian silver screen icon Alberto Sordi once said that Rome is, “not like any other city. It’s a big museum, a living room that shall be crossed on one’s toes.”

Thanks to the University of Reading’s course ‘Rome: A Virtual Tour of the Ancient City’ you can now traverse the famous city on your fingertips alone – and learn about its rich history in the process.

Dr Matthew Nicholls has created a 3D virtual map of Ancient Rome, letting you explore the streets of the Eternal City, travelling inside and around some of the most famous examples of classical architecture in the world.

Join ‘Rome: A Virtual Tour of the Ancient City’

Take a tour of Ancient Rome

On the course, you can ‘walk’ around the virtual city – discovering for yourself what Ancient Rome looked like in its heyday. Dr Nicholls says that the virtual map,

Covers the whole ancient city within a 3rd-century wall circuit, the Aurelianic wall, though I have been careful to extend beyond that as I don’t want the wall to define the city limits as it is sometimes taken to do. It shows the city approximately as it appeared in 315AD, though in fact all the buildings appear simultaneously new.

The course, he explains, “begins with the foundation of Rome in 753BC, but is mostly focused on the first two centuries AD, when Rome was ruled by dynasties of emperors who built up the city to its greatest extent.”

Over just five weeks you can journey with Dr Nicholls as he explores the growth of a small river settlement into a metropolis of a million people – and the centre of antiquity’s most powerful empire.

Dr Nicholls has long had a passion for the city, and he explains that his map-making was in part inspired by the pleasure of wandering the city himself on foot:

I love all of it – my favourite cafes and gelaterias, the walk across the Borghese Gardens to the British School, the cobbled streets around the Campus Martius, the distinctive ambulance sirens, the big lonely archaeological sites out on the Via Appia and the aqueduct park, the travertine weirdness of EUR, the layers and layers of history everywhere in the city centre.

It’s compact and on a human scale; a very good city for walking. Writing this makes me feel a bit wistful, three months into lockdown and with no imminent prospect of returning!”

Part of the joy of taking a tour of the city is in exploring the buildings – some of the most striking and famous anywhere world. The course lets you examine the Colosseum, the Pantheon, and the Forum, among other legendary attractions. 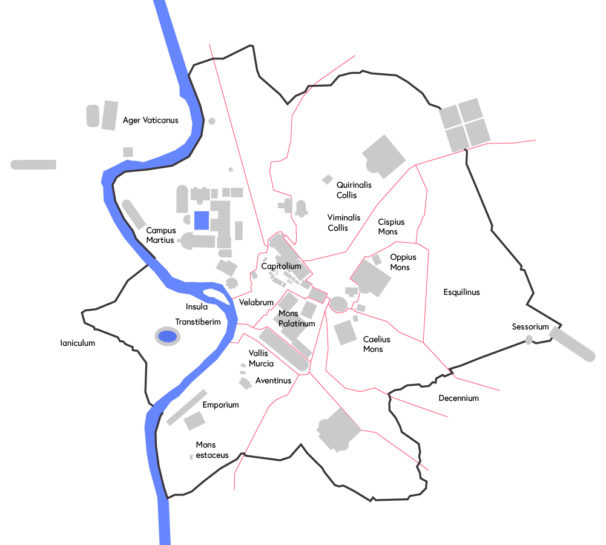 Dr Nicholls credits the success of Roman architecture to the fact that the Romans were “great borrowers”, especially from the Ancient Greeks.

He also points to the “the wealth of the empire, a couple of centuries of relative peace in Rome and Italy, and the capability of emperors to command huge resources”. The emperors also needed to keep a large urban population entertained, which “drove innovation and scale.”

How did Rome deal with pandemics?

Health was also an important factor – a giant city with no knowledge of modern medicine needed to be mindful of basic sanitation, including having a continuous clean water supply.

These unglamorous needs “drove some of the most impressive innovations in aqueduct and sewer engineering.”

Practical innovations in water supply and drainage helped the city grow to around a million inhabitants without collapsing into constant endemic disease. Superstition and religion played a part in ‘warding off’ or ‘curing’ ailments, and widespread cultural habits like bathing showed an interest in good hygienic practice.

During the coronavirus pandemic, we’ve seen stories of wealthier urbanites fleeing big cities for country retreats, and it was no different in the Roman era:

Richer Romans tended to leave the malarial centre of town in the summer months and retreat to summer villas. Epidemic disease was still a problem, though, and famous outbreaks like the Antonine Plague caused serious and lasting damage.

What we can learn from Roman emperors

As well as health crises, the history of Rome is full of salient lessons about leadership. The empire is famed for its mercurial leaders, although Dr Nicholls assures us that the emperors weren’t all bad. His favourite is Trajan, although he concedes this isn’t “a particularly original choice”.

Hadrian also gets a mention, as does the first emperor Augustus, and Vespasian, who “rescued the imperial project after Nero and built some fine buildings, including the Colosseum.”

The Antonine Dynasty, Dr Nicholls asserts, “had the best beards.”

Nevertheless, the Roman pantheon is littered with as many famous tyrants as benevolent dictators – for every Trajan or Austustus there is a Caligula or a Nero.

For all the personal animosity between the Roman senate and the emperorship, real constitutional change was never once considered by Rome’s leaders, and the plebians in the city never had a say in choosing their leader (unlike the limited democracy of Ancient Athens).

The lesson for us today, Dr Nicholls says, is that:

Choosing our rulers is a privilege, a historical anomaly, and we should take that responsibility seriously. Bread and circuses are nice, but good government is important, and difficult. Good character matters.

The daily life of Ancient Rome

In recent months there has been a long-overdue reckoning with race and empire across the world. This has included reappraising the value of statues, monuments, and historical texts, in the light of the atrocities of slavery and servitude that Western empires were built upon.

However, historians of the ancient world seemingly had little to no interest in ‘ordinary’ voices – let alone the slaves who tilled the agricultural estates that fed Rome, and built the monuments we still marvel at today:

In all of Classical antiquity, Greek and Roman – even among great writers who enquired deeply into the human condition – there is startlingly little moral exploration of slavery or ethical discussion of its consequences. They largely seem to have taken it for granted.

To redress this in part, week four of the course covers the daily routine of working Romans – a world described by the poets of the age, who, unlike the historians of the time, “give us a vivid sense of everyday life: traffic, dirt, noise, the pleasures of the baths and the monuments, the hustle and bustle of the crowds.”

With its heralded histories, legendary leaders, and gruesome gladiatorial games, Ancient Rome remains enduring fascinating to modern learners – not least in part because of what their world can tell us about our own.

Moreover, we are drawn to studying the ancient world as much by its ‘otherness’ as its likeness to our own. As much as we can see ourselves in them, we also – as Dr Nicholls puts it – “hope they aren’t like us at all.”

Discover the history of Ancient Rome, and explore a virtual map of the city, in the University of Reading’s course ‘Rome: A Virtual Tour of the Ancient City’.

The post Explore a virtual map of Ancient Rome appeared first on FutureLearn.